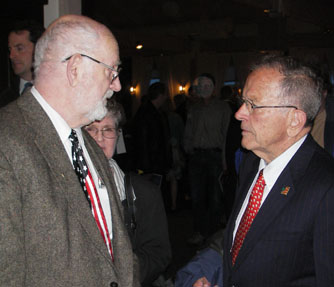 The Brindle Family
One of the largest community based processors for 75 years, helped many fishermen get started in small boat fisheries. (2009)

Chuck Bundrant
Started as a deckhand and rose to become #1 Seafood Processor in North America as co-founder of Trident Seafoods. (2009)

Al Burch
Helped develop the groundfish industry in the Gulf of Alaska and was instrumental in developing federal fisheries management. (2009)

Governor Ernest Gruening
Governor, U.S. Senator, and advocate for Alaskan fishermen before and after statehood. (2009)

Gordon Jensen
Put the resource first on the International Pacific Halibut Commission (IPHC) and was a fisherman founder of Icicle Seafoods. (2009)

Jerry McCune
Fishermen’s representative in EVOS and lobbyist in passage of over 60 bills in the Alaska State Legislature. (2009)

Bob Moss, Sr.
Pioneer in Alaska fisheries for sixty years, served on the Board of Fisheries, was heavily involved in the Alaska statehood movement and efforts to organize fishermen to represent themselves in the fisheries management process. (2011)

Eric McDowell
Southeast salmon troller for 42 years, founded the McDowell Group, and was a leader in the study and application of economics for Alaska fisheries and communities. (2012)

Senator Fred Dyson
Served in the House and Senate of the Alaska State Legislature from 1997-2014 and is known for keeping an open door policy. Senator Dyson has always used his vast experience in fisheries and other careers to address the concerns of coastal Alaska’s families and communities. (2014)

Bob Tkacz
Tenacious, fearless, doggedly persistent reporter; seeker of fact and truth who passed away in 2014. His beat on Capitol Hill resulted in the informative quasi-fisheries publication, Laws for the Sea. (2014)

Albert W. Ball, Sr.
Bristol Bay commercial fishermen for 82 seasons who worked until the ripe old age of 98 who passed away in 2014. Missing only one season, Albert had one of the longest commercial fishing careers in Alaska. (2014)

Jim Kallander
Made significant contributions to the seafood industry, while building a loyal and committed family of friends. Jim fished a range of fisheries from Hawaii to the Bering Sea before passing away in 2014. (2014)

Keith Jefferts
Founded Northwest Marine Technologies in 1974 on Shaw Island, WA and was instrumental in introducing the Coded Wire Tag to Alaska Fisheries. Keith passed away in 2014 but his technology will continue to benefit the entire State of Alaska. (2014)

Jerry Dzugan
For his tireless work in marine safety to ensure fishermen have the tools and skills to be safe at sea. (2021)

Timothy Moore
Cook Inlet, Togiak, and Prince William Sound fisherman who has volunteered countless hours serving on the PSWAC and UFA board of directors and as a tireless advocate for harvesters and the industry as a whole. (2021)

Don Young
Represented Alaska in the U.S. House of Representatives for 49 years (1973-2022).  Congressman Young was an advocate for fisheries throughout the years and was instrumental in getting the Magnuson – Stevens Act (MSA) passed into law. (2022)